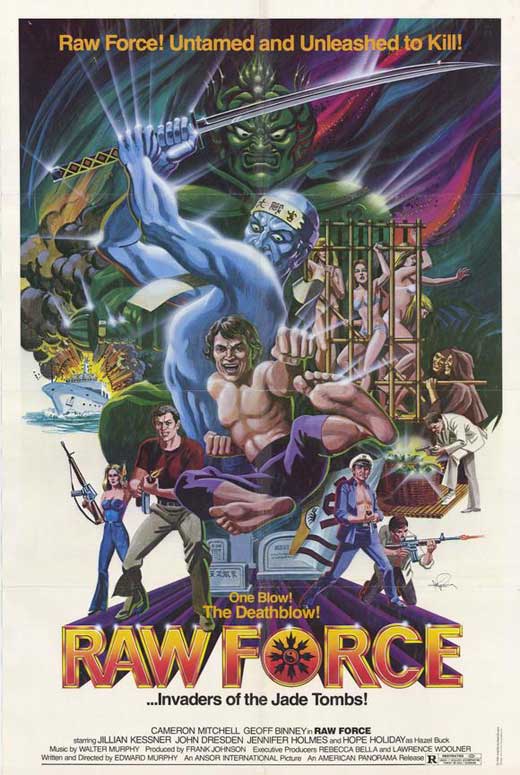 There are no guilty pleasures, and yet there is a certain amount of sleazy, joyful guilt I got from watching Raw Force, aka Kung Fu Cannibals.  I imagine it’s the same sort of sleazy, guilty joy writer/director Edward Murphy (not that Edward Murphy but imagine if it was…) got as he made the film.  Take martial arts action, sleazy exploitation and supernatural horror, and sprinkle it with a small dose of sex comedy.  Give it an almost non-existent budget, populate it with a bunch of terrible but overjoyed actors and combine it with a concept straight out of the head of my son and it STILL doesn’t come close to what ends on the screen, which is a ridiculously enjoyable B movie that gives 100%.

I came to the movie via ’80s All Over, a film podcast hosted by Drew McWeeny and Scott Weinberg.  I’ve followed Drew ever since he was Moriarty on Ain’t It Cool News, and his writing – particularly his Film Nerd 2.0 series where he explores movies with his kids perfectly captures the joy and sense of discovery movies have always held for me.  Weinberg is an encyclopedia of horror movies, and his reviews and books have been instrumentals guides for me when looking for something worthy in the genre.  Putting the two together for a bi-weekly podcast where they review every single major release of the decade (and I’ll definitely be talking more about the show in a dedicated entry) has provided a treasure trove of films I want to catch up on, including Raw Force.

In a nutshell, Raw Force is about a martial art club vacationing on a ship run by crotchety captain Cameron Mitchell, who gets top billing as the only “name” in the movie.  They plan on heading to a place called Warrior Island for some martial arts reason, but unbeknownst to them the island is also the site of a huge jade deposit, and a group of smugglers kidnap young beautiful women with mysterious monks in exchange for the jade. As you would hope and expect, these two things collide and before you know it, you’re waist deep in naked women, zombie warriors, and enough martial art action to fill at least 1 1/2 Jackie Chan movies.

The special effects are hilariously bad, the acting is even worse, but what was surprising was how fun the action was.  The martial arts team are actual martial artists, and what Murphy manages to capture on screen is definitely fun.  You also have a villain who looks like a drunk Peter Ustinov playing Hitler, death by piranha, the weirdest bartender I’ve seen in a movie, and an amazing moment where one of the heroes jumps into a room with a bazooka and fires it point blank at some bad guys.  Raw Force does not hav a fuck to give, and it works because of it.

A lot of Raw Force reminded me of the movies I watched as kid, oblivious to the bad effects and poor quality – for me at the time, it was about seeing something on the screen that matched the fantasies I would make in my head, full of ninjas and zombies and beautiful girls I would save.  I’m sure there are some terrible movies I watched as a kid I loved that, were I to watch them now would shatter the illusions I have about them, but Raw Force manages to overcome its shortcomings and be sincerely enjoyable, a nice diversion from an otherwise stressful day.  Which is what I needed last night.  I just didn’t know I also needed that bazooka scene, but I did.

Raw Force is available in all its HD glory on Shudder.  It’s also pretty easily found on YouTube.