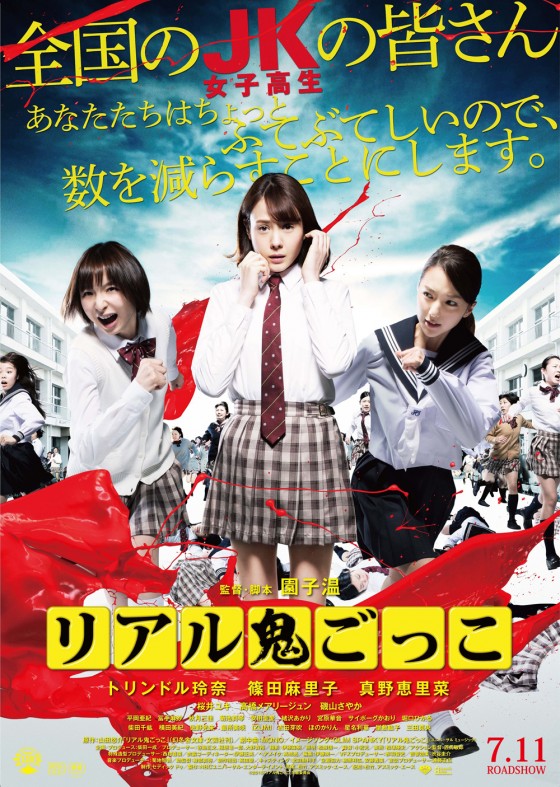 Sometimes a director’s vision strikes you in such a way you’ll follow them even if the direction they’re moving in feels a little, well…off.  Such is the case with Sion Sono, whose Love Exposure was a giddy, surreal ride with a central conceit so insane I was instantly hooked.  Working in the same absurdist realm as Takashi Miike (and almost as prolific), when I saw his 2015 feature Tag was available on Netflix I sat down to see what new images Sono could pull out of his bag of tricks.  The result is a quirky film that dips its toe in female empowerment and the male gaze even as it tends to revel in that same gaze.

The opening is a visual stunner.  A young schoolgirl named Mitsuko (Reina Triendl) is on a bus with his class on their way to a field trip.  Sono plays with cliches and tropes typical in a male fantasy: an entire bus of girls in short uniforms, a pillow fight breaking out.  In the middle of this Mitsuko’s pen is knocked from her hand (she’s quietly writing in a journal).  When she bends down to pick up her pen the first of many shocks arrive, and it’s a credit to Sono I never saw it coming.

It’s hard to navigate plot with giving away the surprises, so I’ll be vague: after the event, Mitsuko finds herself in number of increasingly surreal experiences, not always as herself.  Guided by her friend Aki, Mitsuko starts to unravel the mystery of what’s happening to her, only to stumble onto some meta-commentary that only partially works.  The message is buried by Sono’s delight in arresting images: we’re inundated with gore and violence coming from a myriad of directions.  It’s all inventive, it’s all shocking, but ultimately it’s revealed to simply cover up for a thin narrative that tries to point at something without really taking a stance.

Still, there’s no denying the style Sono brings to all his films, and however he may miss the mark, the majority of his films have something to say beyond the often silly plot mechanics.  Tag is no different, even if it feels more conventional in its aims.  It might not be the best starting place for an example of Sono’s better work, but it has it bloodied and horrific charms.